Groundbreaking Paik Retrospective Opening in May at SFMOMA

The room explodes with brilliant colors, the likes of which are rarely seen in person. Colossal figures strike dynamic poses. A choir of voices and rhythms fill every corner of the enormous space. The sheer magnitude of the piece adorning the walls takes your breath away. This is the Sistine Chapel.

Well, no, these aren’t your ordinary frescoes by Michelangelo. "The Sistine Chapel" by Nam June Paik (1932-2006) is just one of the 200 works on display at the San Francisco Museum of Modern Art’s Spring retrospective "Nam June Paik." A visionary of the electronic age, Paik’s massive assortment of installations, paintings, and music are fascinating meditations on the philosophy and artistry of digital media. 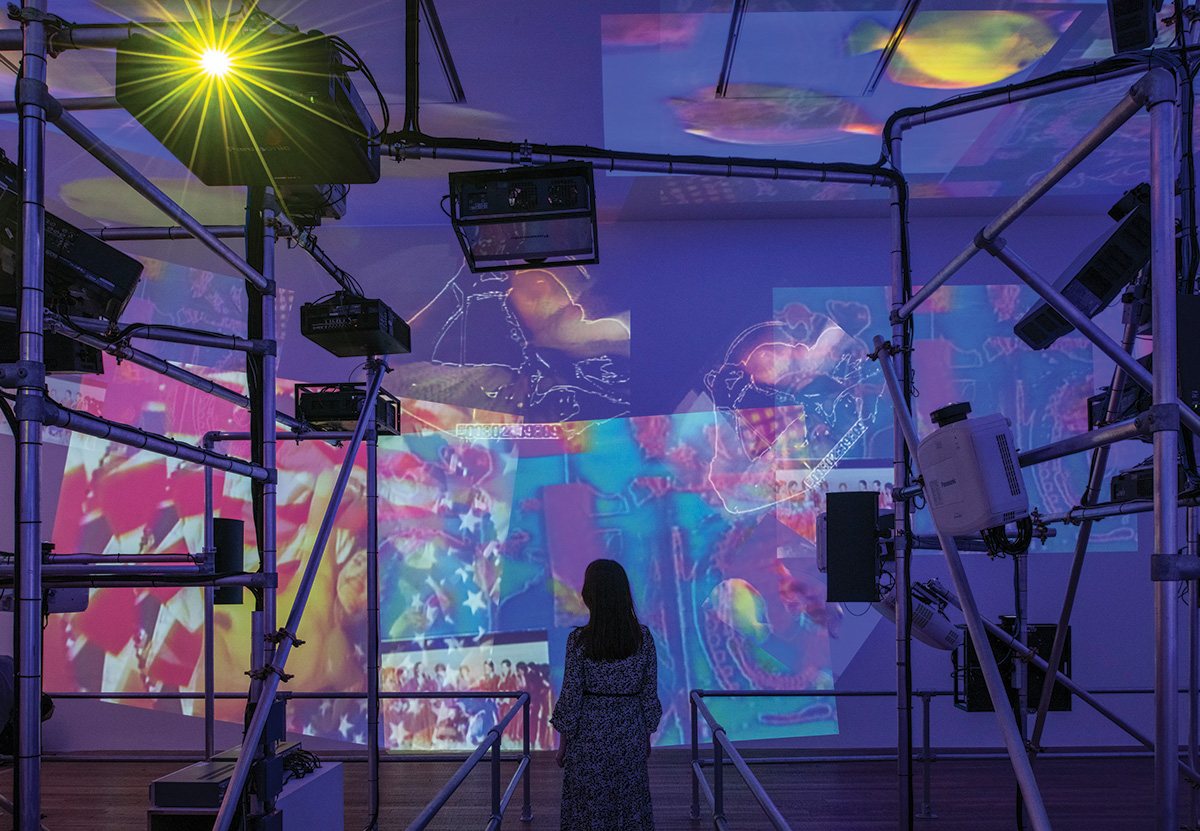 For the first time ever on the West Coast, Paik, who was known as the “father of media art,” will have a retrospective show celebrating his incredible interdisciplinary oeuvre. And the timing couldn’t be better. Anticipating a society inextricably intertwined with digital media, Paik’s philosophy seems almost prophetic. As he once predicted, “Skin has become inadequate in interfacing with reality. Technology has become the body’s new membrane of existence.”

The fusion of organic and mechanical elements is on full display at SFMOMA. Open to the public are such iconic works as "TV Garden," "Chongro Cross," and "TV Crown." These fascinating installations represent some of Paik’s best projects, provocatively challenging our perception of what is possible through media and our relationship to technology. SFMOMA also captures the breadth of Paik’s work by showcasing lesser-known, but equally vital, aspects of his decades-long career. As a member of Fluxus, Paik was globally renowned, yet in his more modest experiments we gain a picture of an artist who is deeply humble, playful, and endlessly excited to share his work. His philosophy, collaborations, love of music, and wit are all captured in this authoritative retrospective. In effect, what we get of Paik is not only the highlights but also the fullness of what he offered to all those who knew him.

Co-curator Rudolf Frieling designed "Nam June Paik" to allow three primary points of emphasis for the artist to come through: migration, collaboration, and music. “Paik was an artist who embodied his own biography in his thinking and in his work. The idea of crossing borders – cultural borders, national borders, and histories – inspired his modes of thinking”. In addition to the influence of Eastern philosophy, Frieling sought to acknowledge the collaborations that sustained Paik throughout his career. Paik collaborated with major artists such as Joseph Beuys, John Cage, Merce Cunningham, and Charlotte Moorman, among others. But beyond being collaborators, they were also his friends. The retrospective shines a light on these friendships and the creative work that emerged as a result. A truly interdisciplinary artist, Paik was also a composer, and with his collaborators he wove together music, technology, and media to expand the parameters of each field. Taken together, Paik’s multivalent work innovated and expanded boundaries, crisscrossing genres, and bringing people together in pursuit of something different.

Reactions to Paik’s work range from confusion to rapture, which completely suits the topics evoked by his artistic practice. How does one “correctly” interpret a piece like "TV Cello" or "Egg Grows"? Frequently, when I first look at a work by Paik, I am stunned, confused even. I almost always wonder out loud, “What on earth is that?” Perhaps that is what charms me most about Paik’s work. He concocted many of his installations well before anyone else even thought to imagine what media could become. By presenting such wild ideas, he invites us to slow down, grapple with our reactions, and see the moments of resonance between these constructed digital worlds and our own. In an era where technology is so ubiquitous as to never be questioned, Paik draws our attention to the vast network of interpenetrating media that has come to define our communication, wars, colonialism, consumption, employment, entertainment — the very bases of our culture.

Fredric Jameson famously framed the new conceptual era of the postmodern by pointing to Paik for the demand he placed on viewers to “do the impossible.” By conjuring experiences out of radical difference, Paik’s installations require that participants take on “a new mode of grasping.”

Mass digital media might not be as rare as it was when Paik debuted many of his experiments decades ago, but SFMOMA’s "Nam June Paik" gives museum-goers an opportunity to reflect on its beginnings. As Paik predicted, today’s culture is infused with digital technology. How do we understand this technology? What are the connotations for our postmodern world? What new relationships must we form to survive in it? Experiencing Paik is an opportunity to walk through those questions, feel the narrative unfold in space, and perhaps, begin to make sense of it all.