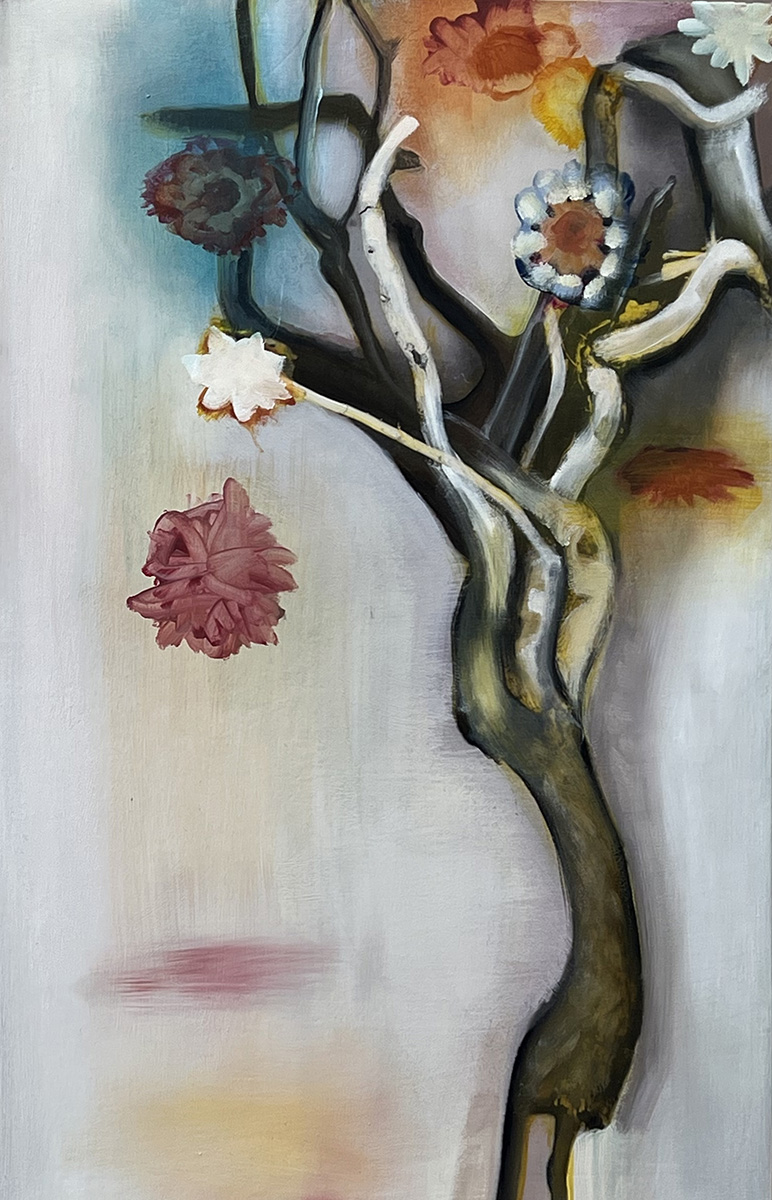 For Pablo Neruda, poetry was a “duty of fellowship” to connect and unite human beings across time and space. His Nobel acceptance speech celebrates the artist’s role in building community and taking part “in the sweat, in the bread, in the wine, in the whole dream of humanity.” It is in that spirit that Arion Press offers "Neruda 10x10," an exhibition of 10 Bay Area artists, each of whom extends that vital human chain with a contemporary response to Neruda’s timeless verse.

Each artist chose a block of 10 poems from Neruda’s "100 Love Sonnets/Cien Sonetos de Amor" as a creative springboard. The results are as exuberant as they are diverse. Felix Quintana’s cyanotypes on coffee filters reawaken lines from Sonnets XXI through XXX by carrying them into poignant urban vignettes. Gina M. Contreras chose a single line from Sonnet LXII – “We Wanted The You And The Me For Ourselves” – as the title and inspiration for her painting of an intimate scene in her compelling signature style. Matt Gonzalez’s “Ever sun, ever moon” takes its radiant chromatic theme from Sonnet LXXXI, expressed as a gorgeous found paper collage of gold and silver. 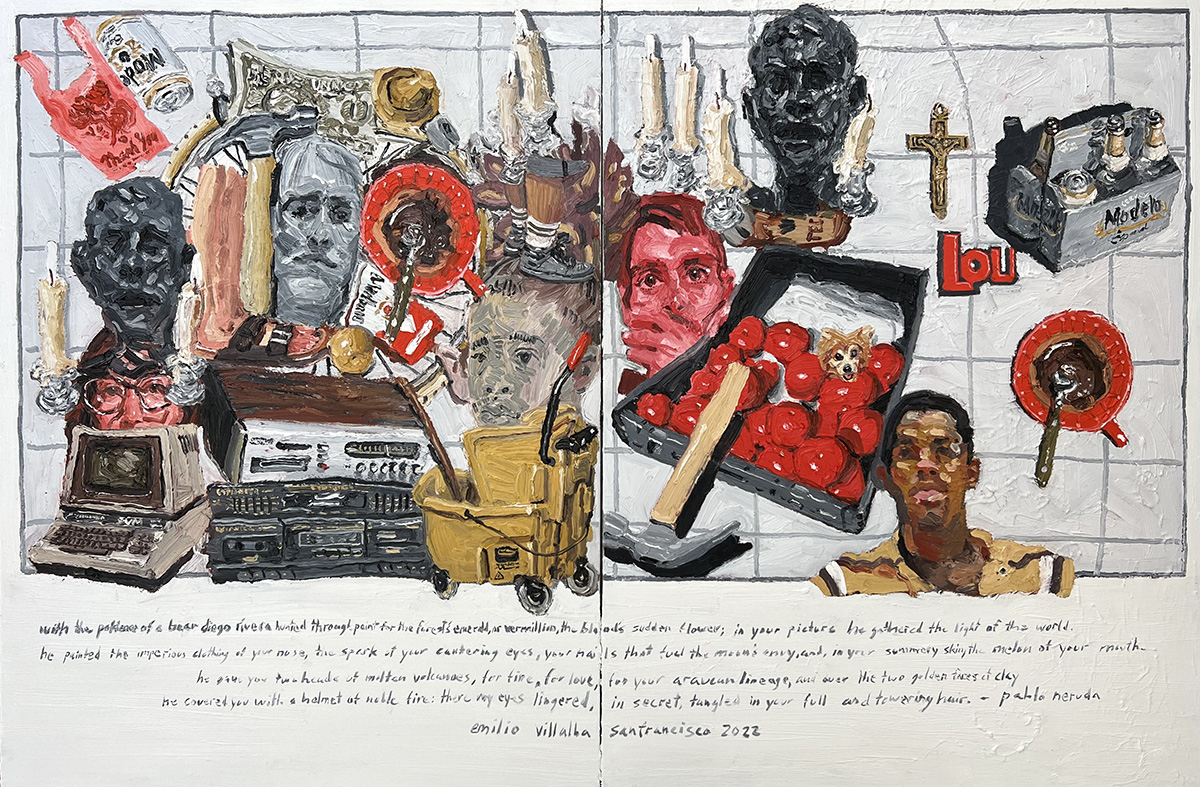 Emilio Villalba, Patience of a Bear, oil on canvas

Emilio Villalba assembles influential imagery and characters from Sonnet LXXVI and pictorial references from his own life in a stunning diptych, which also reproduces the full text of the poem along the bottom portion of the canvas. A mural by Paz de la Calzada graces one wall and her works on canvas and paper beautifully capture the lyrical tones and sensations of sea and land that are so central to Neruda’s poetry. Ashwini Bhat’s silent film seems almost to embody Sonnet XV, with a sensuous enactment of its earthy imagery. Mary Fernando Conrad’s multimedia “Crane’s Head” sews a circle of man-made turf, cardboard, and US currency together into luscious harmony with thread and ink, as an homage to Sonnets LI-LX. 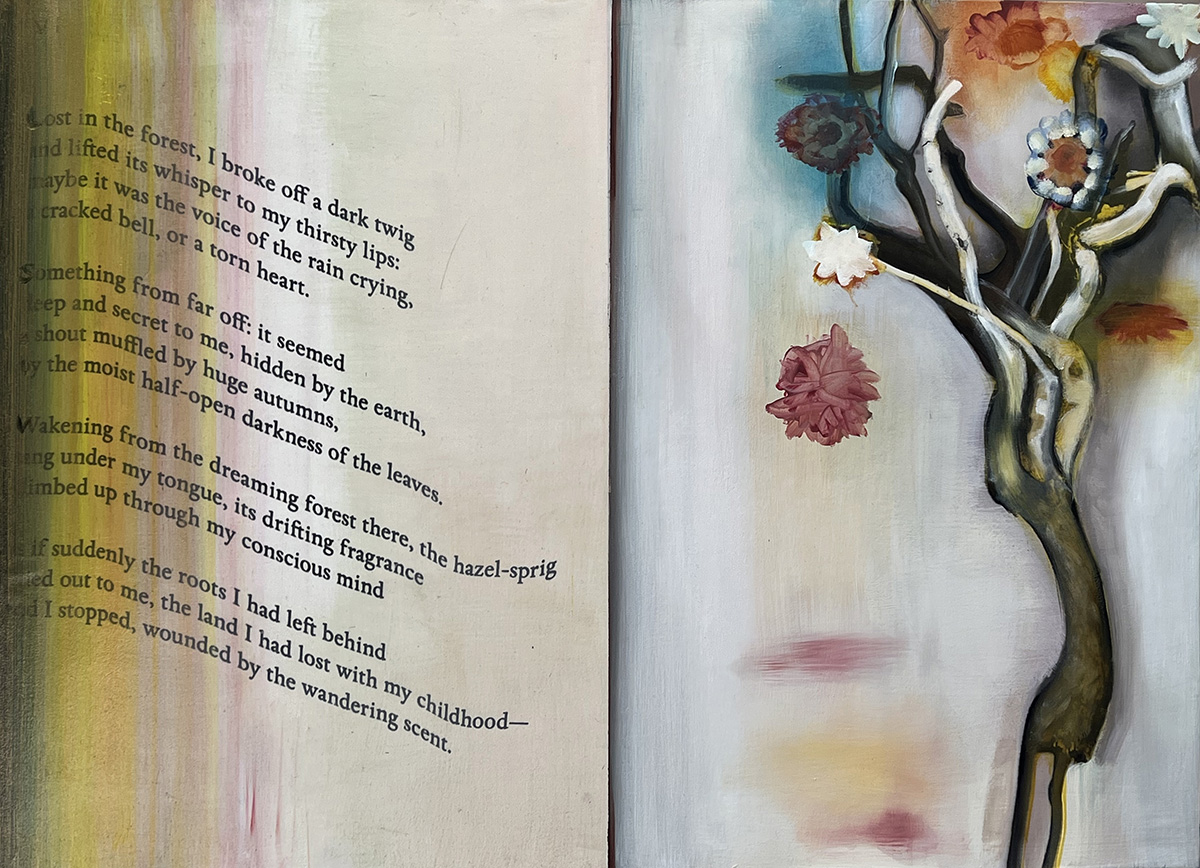 Gustavo Ramos Rivera presents five monotypes, which harmonize poetic lines and vibrant abstract imagery to capture the distinctive vitality, intensity, and allure of the “Night/Noche” sonnets that close Neruda’s collection. Kim Anno’s elegant painting “Wandering Scent” presents Sonnet VI to the viewer as if we were reading the poem’s text on the left side of a book and witnessing the “dark twig” from the poem’s first line emerging on the opposing page. Prompted by poems in the “Afternoon/Melodía” section, Rochelle Youk brings us an outstanding woodblock print in alternative colors on hanji, as an homage to the “Sea, Fire, Sky, Moon.”

The forthcoming Arion Press release of Pablo Neruda’s "100 Love Sonnets/Cien Sonetos de Amor" (Stephen Tapscott, trans.) will be the first bilingual letterpress edition in English and Spanish of Neruda’s collection. This fine press artist book will feature one original print by each of four prominent Latin American artists—two women and two men—whose artwork will introduce alternately each of the collection’s four sections: Morning, Afternoon, Evening, and Night. The artists are María Magdalena Campos-Pons, Nicolás Guagnini, Candida Alvarez, and Enrique Chagoya. Both Campos-Pons and Alvarez have recently been awarded Latinx Artist Fellowships by the US Latinx Art Forum funded by the Ford and Mellon Foundations.