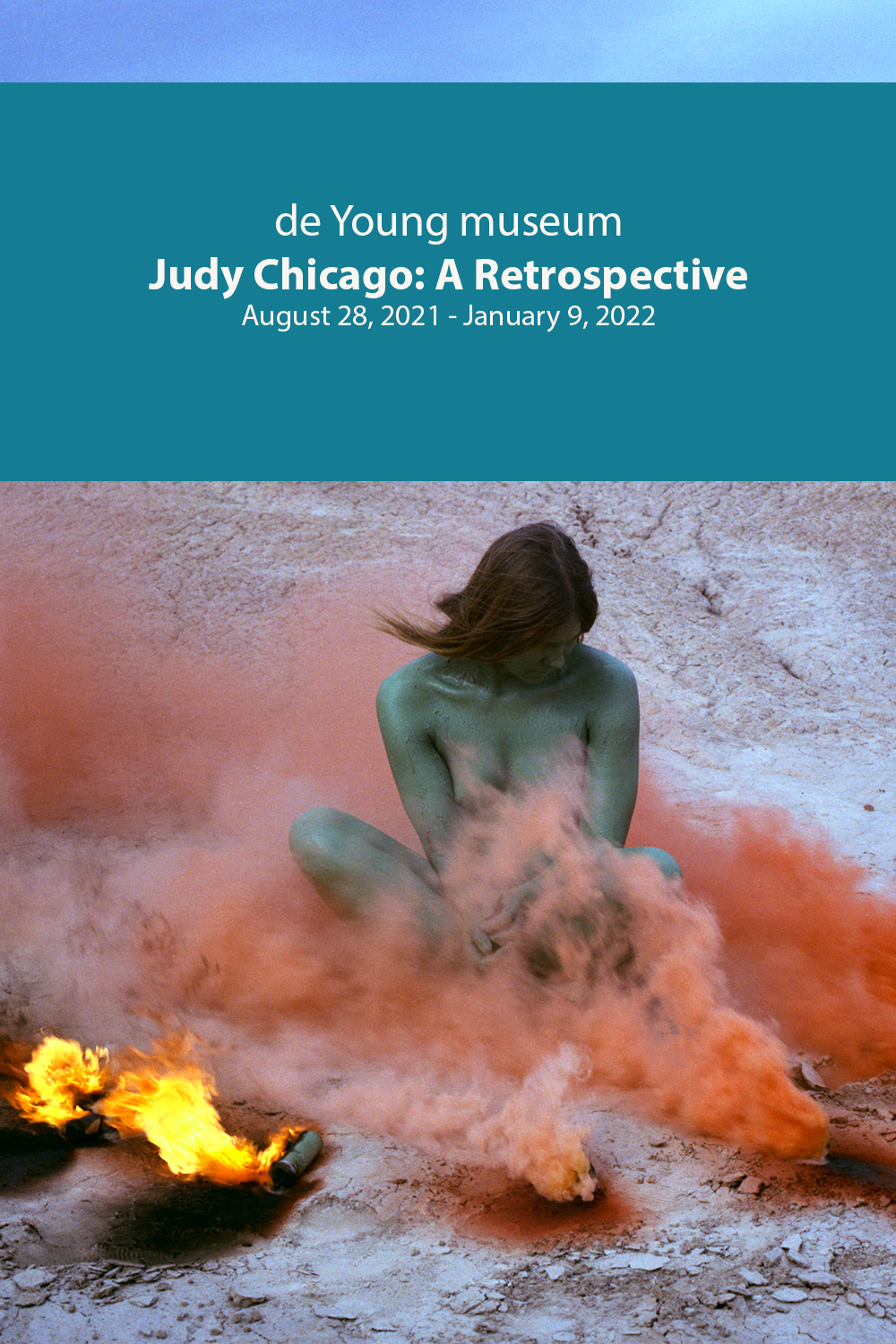 In the Making: Judy Chicago's First Retrospective at the de Young

For decades, Judy Chicago operated on the margins of the contemporary art world — her work shunned by most critics and institutions, and her evolution as an artist eclipsed by the controversial notoriety of a single piece, "The Dinner Party." This long-overdue retrospective features over 125 works spanning her entire career from her engagement with the Californian Light and Space Movement in the 1960s to her most recent investigation of mortality and environmental devastation begun in 2015. "Judy Chicago: A Retrospective" reveals the originality and radicality of Chicago’s choice of subject matter and embrace of media traditionally excluded from the art historical canon.

With a graduate degree from UCLA, she initially worked to blend into the male-dominated LA art scene, thinking that she could earn her place among men by sheer force of talent, ambition, and will. But recognition proved to be the exception rather than the rule. In 1970, having grown tired of the discrimination she had encountered thus far, Chicago took out a full-page ad in Artforum stating that she was divesting “herself of all names imposed upon her through male social dominance” in order to claim an identity of her own. The same year, Chicago founded the first feminist arts education program in the United States at California State University, Fresno, and in partnership with Miriam Shapiro, the Feminist Studio Workshop as part of the Woman’s Building at CalArts, a program and institution that celebrated and nourished the creative growth and recognition of women artists from around the world. 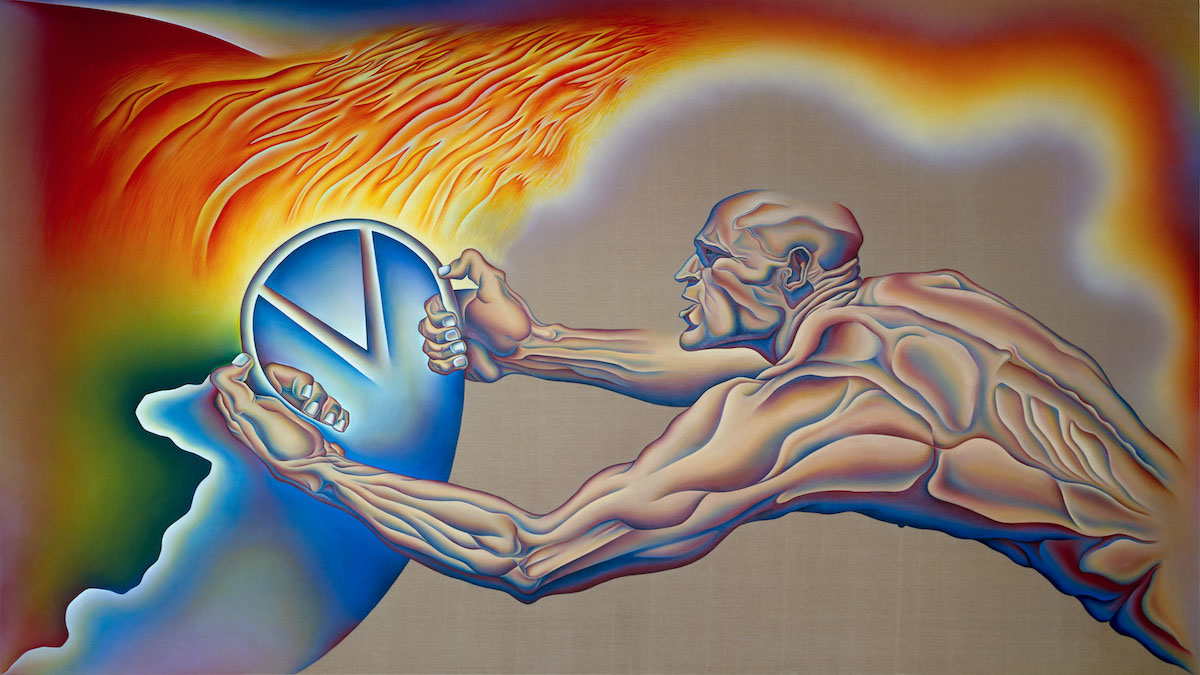 Chicago’s desire to wage war on the systemic erasure of women’s achievements from the historical record eventually drove her back to the studio where she envisioned her landmark installation "The Dinner Party" (1974–1979). An ambitious portrait of suppressed womanhood ranging from ancient deities such as Ishtar and Kali through women of flesh and blood like Sojourner Truth and Virginia Woolf, it was a powerful and empowering embrace of cunts and crafts. Her next series, "The Birth Project" (1980—1985) gave form to one of humanity’s most existential experiences, yet absent from the reigning phallocentric iconography. Building on relationships forged during the creation of "The Dinner Party," Chicago engaged a network of 150 women who specialized in different forms of needlework to realize this collaborative project which celebrates women as bearers of life, of community, of the universe, and of themselves.

With "PowerPlay" (1982–1987), Chicago shifted her attention from femininity as a biological and mythical state to one that is socially conditioned, examining gender as a construct couched in ambiguity. "PowerPlay" presents patriarchy as a concept based on the assertion of dominance. The men in her paintings in this series are raging, destructive, but also suffocating figures, often brutally wrestling with women and nature while “eating” words of fear and empathy. Made at a time when the concept of gender was not generally discussed , these works eerily anticipate current ideas of toxic masculinity.

"The Holocaust Project: From Darkness into Light "(1985–1993) marks the artist’s first large-scale collaboration with her husband, photographer Donald Woodman. Their joint research into their Jewish roots and heritage, resulted in a body of work that considers the horrors of the Holocaust as an exemplar of patriarchal abuse of power taken to an extreme. Drawing analogies between specific events of the Holocaust and other occurrences of genocide across history and geography, "The Holocaust Project" also contained the seeds of Chicago’s future investigations into interspecies relationships and the eradication of the fauna and flora as yet another consequence of the masculinist propulsion toward dominion. Her latest endeavor, "The End: A Meditation on Death and Extinction" (2015–2019) casts an unrelenting eye on the artist’s fear of dying while contemplating the ease with which humans destroy fellow forms of life on this planet.

With the fight against climate change having emerged as a critical, if not the most pressing issue of our time, it appears that for once society and the critical apparatus of its cultural institutions might be in sync with Judy Chicago’s concerns. Today, the aspects of her work that once relegated her to the sidelines of appreciation appear visionary. Her insistence on aesthetic strategies that broke with modernism and harked back to popular and folk art traditions, her lifelong investment in social justice and ecological sustainability, and her desire for her art to resonate on a global scale — these qualities now situate her at the core of society’s value system. Of course Chicago herself always believed what the world has awoken to only recently: that her belated recognition has always been in the making.

"Judy Chicago: A Retrospective" is on view at the de Young museum until January 9, 2022.