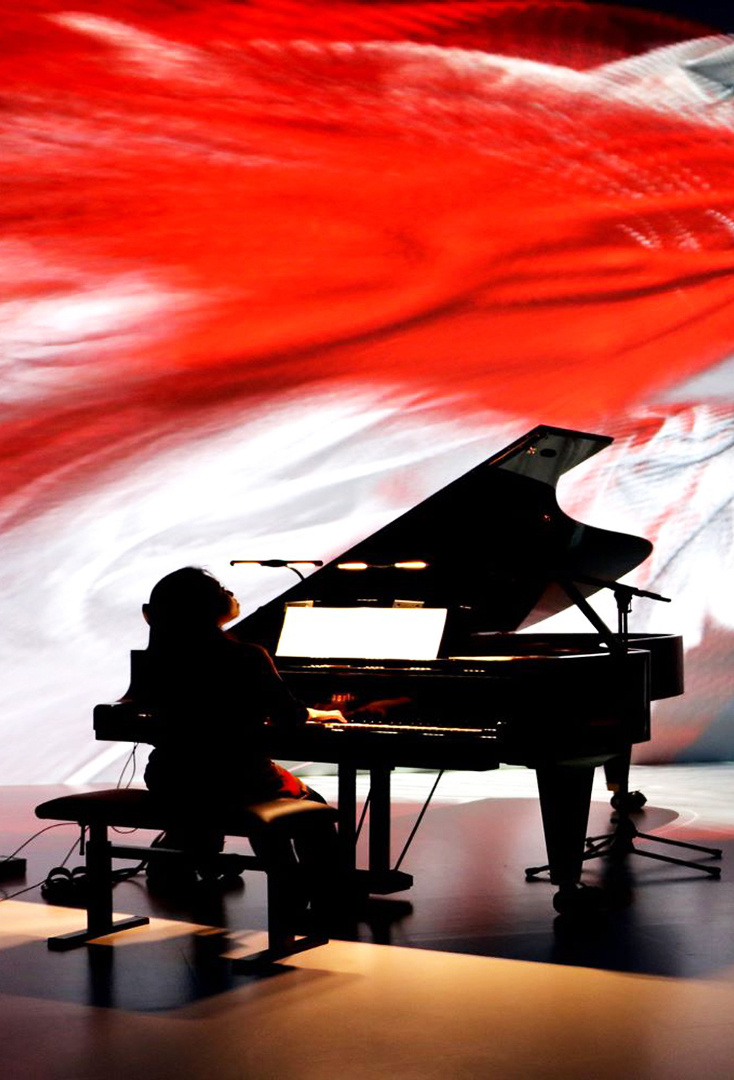 A Stravinsky Premiere? Only in Berkeley

One of the few bright spots during our two-year hiatus from live concertizing has been the worldwide emergence of streaming performances. Truth to tell, not all have been stellar, but among the most inventive in classical music were collaborations by pianists Dennis Russell Davies & Maki Namekawa, with interactive “visualizations” by Cori O’Lan. Their events were transmitted live from the forward-facing Ars Electronica Museum in Linz, Austria, in an aptly-titled series, “Home Delivery.”

On Saturday, March 5th, Other Minds will bring Bay Area audiences the real thing in person. All three artists will appear live onstage at UC Berkeley’s Hertz Hall in a concert of solo and four-hand piano works, accompanied by dazzling, wall-high projections, by the Museum’s director, Gerfried Stocker, one of the digital world’s most tuned-in lovers of classical music.

Stocker’s realtime animations are something to behold — a far cry from a home computer sound visualizer that one may find on their favorite media player. By analyzing the frequency spectrum (pitch), rhythm, and dynamics of the music using a high-powered computer software, he is able to isolate parts of the sonic identity of the piano’s sound and animate them — with almost no latency — into colorful dancing silhouettes and fractals. Part artistic agency and part literal translation of sound, Stocker produces a synesthetic experience akin to only the wildest dreams of Alexander Scriabin, Ivan Wyschnegradsky, and other early dreamers of audio-visual performance. And you won’t find his name credited to any of this. 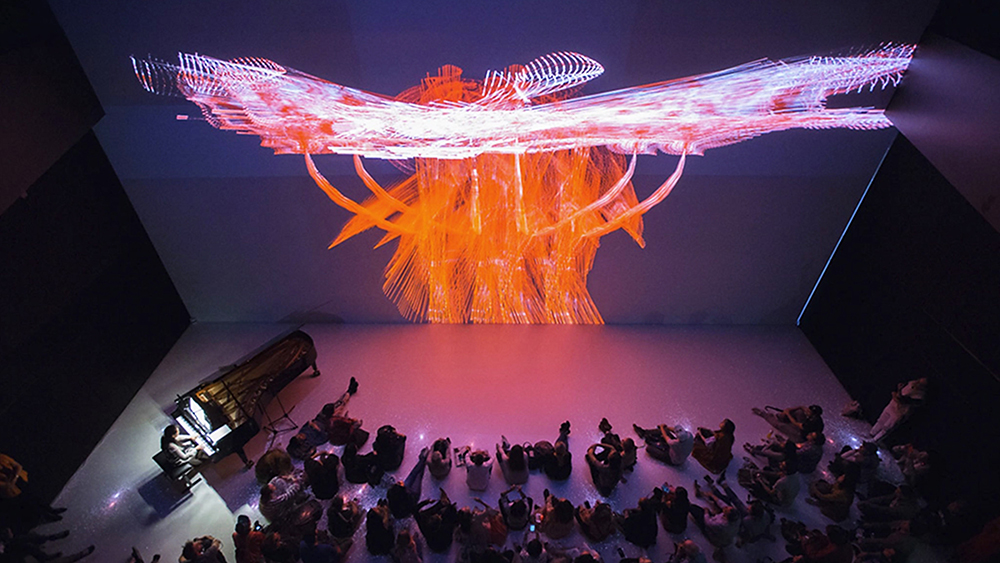 Stocker, the administrator, works as an artist under the amusing pseudonym Cori O’Lan, a reference, via Beethoven, to the Roman warrior Gnaeus Marcius Coriolanus, who successfully defended Rome by defeating an enemy army at Corioli. He then received the Roman Senate’s nomination to become Consul but failed to win the people’s vote and subsequently joined forces with the enemy he had defeated. The tale, dating to five centuries before the birth of Christ and documented in Plutarch’s "Parallel Lives," became the subject of one of Shakespeare’s last two tragedies.

Tragedy hardly describes the career path of Mr. Stocker. He has fought gallantly for art incorporating the latest technological advances. A visit to the website of the Ars Electronica Center will confirm his success in establishing Linz as a fulcrum point for new developments in the electronic arts. And as Cori O’Lan, his sizzling creations feature dancing acrobatic lines and contortionist abstractions, projected above the pianists in sync with the music of Stravinsky, Laurie Anderson, Philip Glass, and others less well-known.

Among those will be the 86-year-old Austrian Kurt Schwertsik, whom Davies met when he was conductor of the Stuttgart Opera in 1985. “Kurt and I are very close friends now, and, like Charles Ives, most of his life he held a day job.” Schwertsik was the hornist in the Vienna Symphony for decades but also studied composition with Karlheinz Stockhausen, was a co-founder of the ensemble “die reihe,” and has composed over 100 works, including 9 concerti, one of them for alphorn. Davies notes, “I’m really drawn toward his music. He writes as if the twelve-tone movement never happened. And also as if minimalism never happened either. His music is tonal but with a pungency that is very sophisticated. It’s challenging to play and rewarding to hear. You could call him a progressive tonalist.” Davies and Namekawa will perform Schwertsik’s Six Macbeth Pieces for Piano Four-Hands with movement titles like “Something Wicked This Way Comes” and “Fire Burn and Cauldron Bubble.”

The featured item on the concert will be the American premiere of Stravinsky’s "Firebird Suite," arranged for piano four-hands by Davies. “Many listeners have commented that hearing Stravinsky’s piano four-hand version of "The Rite of Spring" helped them appreciate even more the compositional values of the work without the distraction, of his ingenious orchestration,” says Davies. “I hope sincerely that this new four-hand version of The Firebird can achieve something similar.”

Hertz Hall, built in 1958 with its acoustically elegant wood-lined interior, is famously lacking in theatrical lighting for an event of this sort. This has been the biggest challenge for Other Minds and the most expensive to overcome. A special projection system and screen will be hired to produce the proper ambience, more easily obtained in a black box theater.

But one thing is certain, even for those who might have heard Namekawa and Davies in concert previously: Those attending in person will be left talking about this dramatic interaction of light and sound for years to come. Cori O’Lan has come to conquer.

For program details and tickets, visit Other Minds